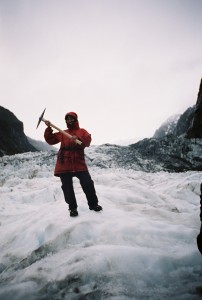 I’ve climbed mountains, rocks, trees, and even a vertical San Francisco street. But I never climbed a river until I hiked up the Franz Joseph Glacier, a colossal river of ice in New Zealand.

It started innocently when I joined the Magic Bus, one of New Zealand’s independent traveler’s network, which provides hop on–hop off transportation along 24 different routes as well as access to a numerous hotels/hostels and activities/tours along each route. I chose the 3-week Kiwi Encounter route through New Zealand’s North and South Islands. The Franz Joseph Glacier was, according to our guide and the locals, not to be missed. Having never seen a glacier, let alone climbed one, I decided, along with twenty other brave souls on our bus, to give it a try.

The Franz Josef Glacier originates high in the Southern Alps on the South Island of New Zealand, descending inexplicably into the lush heart of a primeval temperate rainforest. This unique blend of ice and mountain greenery is an ecosystem found nowhere else in the world. The Maoris call it Ka Roimata o Hinehukatere – The Tears of the Avalanche Girl (Hinehukatere).

Alive and in constant slow motion, the glacier’s topographical landscape changes constantly as it crawls about two feet a day along the earth’s floor, ten times faster than the average glacier. Eight miles long, it plummets in places from a height of 9,000 feet above sea level to a mere 800 feet in the space of a few dozen yards. It is, according to the literature, “the world’s steepest and fastest flowing commercially guided glacier.” Surprised scientists also note that the Franz Josef Glacier, a relic of the previous Ice Age, is actually growing in the Global Warming trend that is shrinking the rest of the world’s glaciers.

The night before our climb, the Magic Bus dropped us off at a lodge within striking distance of the Glacier Guide Service Center. We the next morning around 8 a.m we met up at the center and were joined by dozens of other wannabe climbers. There we waited our turns to be outfitted with rental waterproof jackets, pants, boots, socks, gloves, hats, hiking poles and crampons…the metal cleats that clamp to the bottom of your boot to give you traction when climbing on ice.

Everything was going along nicely until a perky girl name Suzy rallied us together, took our credit cards and presented us with little forms that said the company was not liable for any accidents should we be injured or die falling down, off, or into the glacier. HMMMM.

After paying and signing our lives away, we were broken up into groups of about 12 based on which hike we chose and the speed we thought we could climb. Despite my being very fit and physically strong for age 50, I knew the slow group was the way to go. I thought I would pal up with the only other grey haired women in the room but it turned out she was a champion triathlete. After polling everyone, the staff could not find anyone else interested in joining the slow group so they assigned me to the intermediate group. One look at all those college aged kids and the triathlete and I knew that I was destined to be a straggler.

They piled us onto a bus for the 15-minute ride to the park entrance. On route, as the glacier slowly came into view, I saw what looked like a trail of ants crossing one of the glacier peaks. “What’s that?” I asked our guide, Myrna. “Those are hikers,” she said. “That’s where you’ll be later today.” I thought she was joking. I couldn’t imagine climbing that far and that high, and then coming back down, all in one day.

We disembarked at the park entrance and began the hour-long trek along a stark rocky path to the base of the glacier.
Passing the first big yellow danger sign did not alarm me or prepare me for the enormity of this undertaking. Perhaps I was in denial. My mother always said, “That girl does not have a healthy fear of danger.” Despite my enthusiasm and eagerness I still managed to end up at the back of the group where I stayed for the rest of day. As we drew closer to the glacier, the terrain became interlaced with chunks of ice that grew in size and volume. Intermittedly, we could hear the glacier as it shifted, cracked and crumbled noisily upon itself in a kind of ongoing glacial monologue.

At the site of the first leg of our ascent there was another warning sign, “Extreme Danger-Proceed with Caution”. Remaining oblivious to its true meaning, I acted as if it was an interesting decoration.

In single file we climbed up a long weather beaten metal ladder that was propped against a short 10 feet wall of ice. At the top was a small plateau where Myrna announced that it was time to don our crampons and climb through our first ice cave. Its smooth glasslike archways opened into a magically glowing blue ice tunnel, the size of a four-car garage. Clanking and clambering our way through, we came upon starting point of our first serious climb. It was a vertical staircase carved into the glacier, each step a sheer two-foot ascent, adorned with stakes and ropes for our climbing safety and “pleasure”. Being only 5’2” feet tall and each step being nearly half my height created the equation for a guaranteed ordeal. As I breathlessly scrambled my way to the top of the first eight set of steps a sobering chill came over me and as I began to realize what I had gotten myself into. There was another staircase and another and another. After what seemed like an hour of climbing, we came upon our first ice hollow, a tunnel winding down beneath the surface. Myrna showed us how to grab the rope and slither into the narrow translucent blue opening. What a thrill it was, zooming through the slick curvaceous cylindrical passageway. And more adventures lay ahead. In the course of our ascent, between the staircases, we found ourselves edging and shimmying through narrow ice paths and caves; cautiously making our way across treacherous ice canyons; peering over crevices that dropped and slid all the way down to the valley floor; and crossing bridges made of ladders and wood suspended over steep ravines and deep blue abysses. My one terrifying glance below told me that one wrong move, or an unfortunate slip, and I would be history.

Four plus hours later, Myrna pointed upward and announced that the summit was finally was in view. As our crew squealed in delight, I silently wondered, “How am I gonna make it?” The thrilling ascent and taxing ordeal had taken their toll. I was “plum wore out” and running on vapors. The life long overachiever had met her match. When the next rest break failed to rejuvenate me, I told Myrna I was hot and exhausted and didn’t think I could go any further. “Why don’t I wait here and join you on the way down?” I suggested. “Absolutely not,” Myrna was adamant. “You’re hot because of all energy you expelled to get here. But if you stop now you’ll freeze to death. Besides, we’re not coming back this way.”

Myrna’s grim warning was as good as an espresso. It motivated me when my body told me I didn’t have the strength to keep going. Somehow I kept putting one foot in front of the other, clawing my way onward and upward. As we neared the summit, I found my second wind.

And then, finally, I was on top of the glacier. I looked around in an adrenalin-induced haze, drinking in the stark beauty of the terrain, and it ushered me into a state of grace. I stood on a phantasmagorical planet where, beneath a bright sun and a clear blue sky, dazzling whites and radiant metallic blues played every trick that light can play. Above and beyond, white peaks towered over a crystal landscape. On my left gushing waterfalls tumbled down rocky frozen cliffs. Below on my a right a lush verdant rainforest stretched for miles. I stood mesmerized by beauty, feeling awe, mystery and humility. Waves of joy flooded through me. I was happy. I was tired. I was proud. I had faced death, fatigue, extreme weather conditions, perilous frozen terrain and lived to tell. I was a hero in my own life. *******************(hey d, here is one possible ending place for this story or you can keep going)

We stayed at the top for less than an hour. Half of the people seemed to be captivated by the majesty and power of the experience and the other half were deeply engrossed in an orgasmic photo frenzy.

As we prepared for our descent, Myrna gave me a high-five and told me that I was now standing in the place where I had seen the hikers (ants) from the bus 6 hours earlier.

The climb down the river was a lot less strenuous than going up. Scurrying and staggering down its steep side gave me a chance to ponder the day’s adventures. With a flurry of exhilaration coursing through my veins, I was filled with gratitude for the six senses and good sense to be able to appreciate and experience this glistening cerulean creation as well as for the good fortune to be climbing the blues and not singing them.