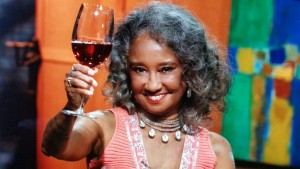 Bookmarked is a series of interviews with women and nonbinary writers of color about their novels and memoirs of navigating lands, languages, and themselves—and most of all—about taking up space everywhere we go. Bani Amore interviewed Elaine for Bookmarked in October of 2017.

What’s possible in literature, and therefore in our world, has been determined by dominant cultures since the onset of colonization and chattel slavery, an intentional master narrative that erases the storytelling traditions of communities of color. There’s a reason why the masters of enslaved Africans forbade them from reading and writing—it might have given them ideas. But there have always been and always will be mavericks, who, at great risk to themselves, not only imagined freedom but wrote it into existence.

Writer Elaine Lee, editor of the anthology Go Girl! The Black Woman’s Book of Travel and Adventure, is one of those mavericks who continues in this tradition of defiance. Her book, published in 1997, is a timeless collection of travel writing from the likes of Alice Walker, Audre Lorde, Maya Angelou, and nearly 50 others who continue to break the mold of what’s possible in travel culture. In this talk, I spoke to Elaine about travel as self-care for Black women, the lasting impact of her anthology, and the revolutionary power of diasporic travel narratives.

As we know, travel literature has been dominated by white folks, erasing the efforts of people of color and Black writers in particular. When putting together Go Girl!, why did you want to focus specifically on the work of Black women?

When I took my first solo trip around the world in ’92, I was just so surprised at how few Black women I saw and then also just how easy it was to travel. I had never met another Black woman who had traveled around the world. I thought, “Here I am. I want to take a trip around the world!” And folks were like, “Well, is that even a thing that Black women do?” And that added a layer of fear, particularly for my mother, who said, “My God, what are you doing? Have you lost your mind? This isn’t even a thing Black people do.” I was motivated to do something because I looked at the marketplace and there were no Black travel books in ’92, other than some old ones like Richard Wright’s [writings] from the ’40s and Vibration Cooking [by Vertamae Smart-Grosvenor in 1970]. There really needed to be a role model, so that’s the reason I put the book together, so people could see that this is something that Black women do. It would reduce the fear. I found when I did my book tour that the most pervasive concern people had was fear, and I think that showing Black women successfully navigating the planet would make things easier.

In your introduction to the book you allude to traveling outside the US as something we talk a lot about these days: self-care. Do you see travel as a form of self-care for Black women?

I do, I really do. If you look at the statistics, Black women have higher [rates of] diabetes, heart attacks, breast cancer, divorce, obesity, infant mortality. Being a Black woman in America is so stressful! A lot of us don’t even realize the effect it has on us. But if you step outside of the country and the heavy cloak of American racism comes off, you realize what a heavy burden you’ve been carrying and why you feel so much stress.

We’ve got to figure out ways to cope with that stress, and in many ways I think that it’s life-giving and edifying and educational and rejuvenating to travel. So, to me, I’m creating a form of liberation.

When you return from a trip abroad and it’s time to don the cloak again, you can identify it better. It was interesting; I wanted to give a talk at a [Black-owned] bookstore, and they were saying, “We don’t want to talk to you about this bougie stuff, this travel stuff.” But I thought, this isn’t about “bougie” at all; this is about survival! It’s so stressful for Black people in America. We’ve got to figure out ways to cope with that stress, and in many ways I think that it’s life-giving and edifying and educational and rejuvenating to travel. So, to me, I’m creating a form of liberation.

You’ve been doing this work for a minute, so I wonder what you think about this resurgence of Black women travel writers we’re seeing, mostly online, and more generally, what’s been referred to as the New Black Travel Movement.

It’s so frustrating! [Laughs.] I’m so happy to see it, but I remember when my book came out in ’97 and I contacted extensive magazines, including Essence, and asked them to do a story about it or about me and they weren’t even remotely interested in it. They said that Black women don’t travel, blah, blah, blah. And I was really surprised, because to me this was something that they should have embraced and seen the value in, but they saw none. They never took my book or my pitches on Black expats seriously. Now, they’re doing all these stories on Black travel I suggested years ago, so it frustrates me that they were so shortsighted [then], but I’m glad that they’re finally coming around. [Laughs.] It just took effing forever. I think that’s just part of being a maverick—I had a vision and I was ahead of my time. And as someone said to me [back then], “You are trying to change public opinion. You’re trying to change the mind of millions of people, and you’ve got so much working against you.”

I think that’s just part of being a maverick—I had a vision and I was ahead of my time.

There’s so much that wants to keep Black [people] from traveling; [just look at] our history of traveling in America. With Jim Crow, travel used to be extremely difficult for Black people—we couldn’t stay in hotels, eat in restaurants, or find toilets. There were even sundown towns before the end of Jim Crow where people had to be inside before six o’clock or you would get arrested. We have a history of interference with our ability to travel. All that is to say that there were so many reasons that Black people didn’t travel. It’s been kind of a protective thing for us to not travel and there was no literature for us about travel. I was up against a lot. I could understand then why my book was not welcomed with open arms from the Black media. Now, whenever I see someone write an article saying that there’s no Black people traveling, or they just discovered that Black people travel, I write an email and go, “Hey! Wishing you well in your work and by the way . . . I have this book out!” So it’s interesting to me that a lot of people don’t seem to do their research, but I’m glad that now with the Internet, Facebook, Nomadness [Travel Tribe], and the Black travel movement, Blacks are seeing themselves all over the world and thinking, “Okay, this is safe, this is fun, this is cool,” Voila! It’s happening.

Go Girl! is separated into three sections by place and theme, but overall, the book is dominated by stories of Black American women traveling to the African continent and in other majority-Black places of the diaspora. What do you think that says about the importance of travel for women or Black folks in diaspora in general?

I created a book with the very first chapter on traveling to Africa because I really think that African American people need to go to Africa at least once in their lives, kind of like with Muslims who have to go to Mecca. Part of why I feel that is that when I went for the very first time, I felt like I got part of my soul back. I didn’t even know it was missing! I was like, “Oh my God!” It was shocking to realize that I am truly an African that just happens to be from America. There was still so much Africanness in me, and I was really thrilled at that. My head was a little higher, my back was a little straighter. Part of the reason I think that whites have worked so hard during and post-slavery to create a schism between African people and African American people is because they can exploit the continent—exploit us. There’s been a vested interest to keep us disconnected, and I want to overcome that and help Black folks feel more of a connection with their African heritage, to get a part of their souls back, too. And to feel their Africanness as a form of defiance.

I dedicate my work and my journeys to that longing within to be free and wanting that for other African American people.

The slave owner was not 100% successful in eradicating Africanness from our lives, though that’s what he planned, and I thought he had pretty much succeeded in particular [with the lingering] slave mentality in America—the vestiges of slavery that are alive and well in modern day Black Americans. But if you could go to Africa and learn, see those historical patterns, that Post-Traumatic Slave Syndrome, and get a sense of how that happened, if you could dissect that, then you could create more freedom in your life. One of those ways is the act of defiance to see the world. One of the ways I bless my journeys is that I dedicate them to the ancestors who longed to travel [because] they were enslaved, thinking, “If I could just get back home, if I could just get out of this situation.” They weren’t sittin’ back and happy! They were angry and they wanted out and longed to be free. That’s what so many of the spirituals are about and why so many ran away. I dedicate my work and my journeys to that longing within to be free and wanting that for other African American people.

The anthology is very rich, diverse, and extensive—almost 400 pages long. Can you give us a glimpse into the process of parsing through submissions? Do you have a favorite story from the book?

I was thrilled to have about 250 stories to work with, but I only had room for 50. So I not only have people’s stories, but you’ll also see excerpts from the “rejected” pieces throughout the book which enabled me to get more women in. Seeing that was so encouraging for my work because I had so longed to be published and there wasn’t any forum . . . well, to this day! I mean, where are Black women going to get their travel stories published if it wasn’t for the Internet? Because if you’re trying to go with print or newspapers, you’re going to [be met with silence]. There was no place for Black women’s travel writing to be featured in ’92, so to me it almost became a sacred calling because people really needed these stories to be shared.

I think the one that touched me the most was this elderly woman who had been a career diplomat for 52 years and had traveled all around the world visiting 109 countries, and [she] always wanted to write her memoir. When I came around with my book and agreed to publish her, she was so deeply grateful that her work was finally going to be published that she didn’t even cash the $100 check that I sent her. I visited her in DC while I was on a book tour; she had a party for me and had the check in a frame on her wall. It just meant so much to her! To be able to do that for a Black woman elder—to lift her words up—I think that was the most sacred and touching experience of all.