I had been to Australia more than 10 years ago and spent time exploring bustling Sydney and beautiful Cairns. Two of my most favorite places ever! So when the opportunity to travel through the interior of Australia and to the “Top End” Darwin, the capital of the Northern Territory, I just jumped at it.
My main reason for the trip was to learn more about the connections of the Aboriginals, the oldest people on the planet, where it is estimated that they have roamed the continent between 40,000 and 60,000 years, to what is now Australia.
I began my trek north via a plane ride from Sydney to Ayers Rock and entered the Uluṟu Kata-Tjuṯa National Park. My first sighting of the iconic big red monolith, Uluru, was during the short hop from the airport to our hotel. Even from some distance its powerful burning red presence is jaw dropping. With a circumference of 5.8 miles and a height of 1, 142 feet, it is impressive.
Uluru, is the proper Aboriginal name for this largest and most well known of the two red sandstone rock formations, and is considered by Aborigines as a sacred and spiritual place.
It sits almost halfway through what is called the red center of the continent, and is Australia’s most famous landmark and a UNESCO world heritage site. It attracts thousands of visitors every year.
After many years of negotiation with the government, it is finally managed under a partnership between the Anangu Aboriginal clan and an Australian government authority. The clan oversees access to the park and orchestrates the activities it stands on. Visitors need permission to enter the park and must pay a $25 AUS fee.
Later in the afternoon of our arrival we were driven into a desert dunes clearing where we enjoyed a wide shot view of this magnificent rock. This was the beginning of The Sound of Silence, a nightly entertainment. At sundown, while sipping sparkling wine and sampling assorted canapés — including roasted kangaroo — I mingled with a small group of tourists from around the world, we socialized; while standing on the red dirt; but most of us kept our gaze on Uluru as the sun melted into the horizon.
Later on we were escorted further into a clearing where a blaze of white tablecloths adorned tables set for dinner. A first class on-site staff prepared and served an appetizing dinner with premium Australian wine, while a Didgeridoo — an ancient Aboriginal wind instrument, serenaded us. Out of the dark a trio of young Aboriginal men appeared in full clan make-up and began ancient call and response chants accompanied by dance steps. They were painted in shades of gray and white and appeared almost as ghosts — haunting and eerie, but meaningful.
The culmination of the evening was a night sky tutorial presented by an astronomer who guided our stargazing at a dazzling sky while listening to him as he located constellations and individual stars using his digital sky wand. As he decoded the southern sky, I felt as far away from ‘civilization’ as I have felt a long, long time. The four hours was captivating and delicious — and went by in a flash.
This evening of events is known as an ‘Australian Hall of Fame’ tourism experience and is offered 365 days a year. In my Chicago neighborhood I rarely see many, if any stars. This evening certainly was a highlight of the beginning of my trek.
I can see why Australia draws one to its shores, but if you miss the center of the country and the Northern Territory, you miss the heart of this wonderful country.
Pat Johnson (Co-host of the PBS travel series Grannies on Safari)

I recently traveled to Australia in October to specifically visit the Northern Territory. Why there you ask? From Alice Springs all the way up to Darwin, is the land of many Aboriginal clans. The opportunity to see the interior of Australia and experience the culture and art of the Aboriginals was my focus. What follows is a list of my top ten reasons why you should visit too! So take a look…Regina Fraser (Co-Host of Grannies on Safari PBS Travel Series)

1. Uluru or Ayers Rock: An impressively large, red sandstone monolith rising from the Central Australian desert. A spiritual and sacred place for the local Yankunyjatjara and Pitjantjatjara Aboriginal clans. Ancient rock art can be found throughout the monolith. Standing 1, 142 feet high and 5.8 miles in circumference, this huge red rock is part of the Uluru Kata-Tjuta National Park. This rock is breathtaking and watching the sun set against this background will stay with you for the rest of your life. (http://www.parksaustralia.gov.au/uluru/people-place/amazing-facts.html)
2. Alice Springs: The heart of the Red Centre of Australia and the 50,000-year-old cultural/arts center of the Aboriginal people. Home of the Royal Flying Doctor’s Service, and gateway to Uluru and Kata-Tjuta (the sister rock to Uluru). A good walking city and I loved the parks and art galleries. Enjoyed the local shopping mall and looked at how foodstuffs were displayed. Stayed at Lasseters Hotel – it’s a casino too! Great food and friendly people in the casino and bar. (www.lasseters.com.au/)
3. The Ghan Train: Named after the Afghan cameleers who worked the trade route between Adelaide and Darwin. One of the finest luxury trains ever, it traverses right through the middle of Australia. One wonderful stop was at Katherine to visit the Katherine Gorge to see Aboriginal rock art. Best train cabins, food and drink – and all while watching the most spectacular landscape ever rolling by. (http://www.australia.com/explore/itineraries/sa-ghan.aspx)
4. Kakadu Crocodile Hotel: Found in Kakadu National Park, and managed by local Aboriginal clans, this hotel is shaped like a large saltwater crocodile! So unique, with the guest rooms forming his body and other rooms forming the rest of his body. A picture of the hotel from the air gives you a good idea of the shape and layout. Artwork throughout the lobby and other areas is from local artisans. The restaurant has great food and a delightful pool that provides a cooling diversion from the park heat and humidity. (http://www.gagudju-dreaming.com/Kakadu-Crocodile-Hotel/Overview.aspx)
5. Kakadu National Park: A two-hour drive from Darwin, the park is not only Australia’s largest national park but was designated in 1992 as a UNESCO World Heritage site. Full of wildlife – including wild camels, horses, pigs, feral cats, and water buffalo, which are not natural to the environment but left over from earlier importations for agricultural needs. Ancient Aboriginal rock art (more than 1500 sites), are found throughout the park. It’s worth the climb to see most of it and don’t miss the chance to climb the steepest escarpment to see a 360 degree view of the landscape. This is one of the most beautiful wildlife and conservation parks in the world. (http://www.parksaustralia.gov.au/kakadu/)
6. South Alligator River: No… there are no alligators in Australia but a European explorer mistook the crocodiles for alligators and thus, named the rivers and the name stuck. (There are three rivers in the area: South, North and East Alligator Rivers.) Cruise with a local Arnhem Aboriginal Ranger and learn all about the river and the history of their culture along the rivers. See the large water lily pads with huge pink flowers and beautiful birds as you float along the river – so beautiful.
7. Nigel – Our Arnhem Ranger/Guide on the South Alligator River: One of the most spiritual and knowledgeable rangers I have ever met while on any “safari.” We couldn’t count the number of crocodiles we saw – and some big ones too! Nigel shared clear and in-depth information about his people and their mores and culture. He was respectful and articulate. He demonstrated spear-throwing techniques, and when we left we respected the park, the Aboriginal people and … the crocodiles. (http://www.australia.com/explore/states/nt/arnhem-land.aspx)
8. Warradjan Aboriginal Cultural Center: As part of Kakadu, this center represented and offered information about the many cultural aspects of Aboriginal life. Art was displayed from the Arnhem, Binijn, and Katherine clans. It was a great place to buy local art pieces, which support their communities. (www.gagudju-dreaming.com/)
9. Darwin and the “Top End”: This tropical capital city of the Northern Territory is the closest Australian city to Asia, and accounts for its diversity. This friendly, laid-back city has so much to see and do that if you ever go to Australia – don’t miss it! Darwin has a history of natural and manmade catastrophes – the city was totally destroyed in WWII and, in 1974, Cyclone Tracy destroyed most of the city again. But, like a “Phoenix”, the city rose and is bustling and important on several levels. Take the “Hop on Hop Off” bus to get the best overview of the city. ( http://www.tourismtopend.com.au/)
10. Museum & Art Gallery of Northern Territory: In Darwin, this museum holds a large collection of natural flora and fauna of Australia and specifically from the Northern Territory. Make sure you see “Sweetwater”, a huge crocodile who was very famous in the area. The display of contemporary and ancient Aboriginal art is outstanding. Each piece tells a story of the history and culture of this civilization which is thought to be the oldest continuous civilization on earth and more than 50,000 to maybe 60,000 years old. (www.magnt.nt.gov.au/)
11. Okay I said just 10 but we can’t forget the people and food of the Northern Territory. We ate kangaroo and crocodile prepared many ways and it was good! My favorite – a gelato parlor near our hotel in the center of the Darwin. I would go back just for this treat!
Granny Regina, dreaming of Uluru and listening to music played on a didgeridoo! 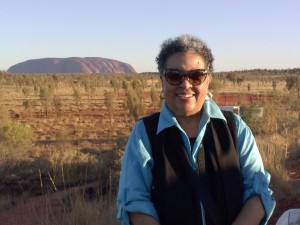